AFV Sim specialises in designing, manufacturing and supplying high fidelity simulated controls for Armoured Fighting Vehicles that are used to assist training individuals and crews of:

The controls can be supplied with a “Plug and Play” USB interface, enabling them to be used with standard desktop or laptop computers, without the need for special software drivers. The controls are compatible for use with software designed for simulation training for Armoured Fighting Vehicles, such as Steel Beasts Professional and PE, developed by eSim Games or VBS2 from Bohemia Interactive Simulations.

The controls can be supplied as individual units and used with the customers own training software, or complete with the necessary equipment and third party software to provide a basic, cost effective, part task desktop trainer. The controls can also be integrated into high fidelity simulator systems.

AFV Sim has a worldwide customer base, supplying controls directly to:

Some of the vehicles and platforms that AFV Sim have developed and supplied simulated controls to assist Gunner and Commanders training include:

The latest Armoured Fighting Vehicles use complex control handles, with multi-functional switches and buttons, requiring the crews to undergo intensive training. Using AFV Sim’s simulated control handles as part of a desktop trainer, Commanders and Gunners are able to learn, develop and practice these skills in a classroom, without the need of the original equipment controls, platform, or vehicle. Our controls have been proven to be a cost effective training solution for several gunnery skills. As a simple example, a customer used to train soldiers to bore sight a Remote Weapon Station by using the platform and firing live ammunition on range. These basic skills are now taught and practised with simulated controls and simulation software in a classroom and this method has considerably reduced the amount of ammunition previously required.

Simulated controls manufactured by AFV Sim have been used for computer simulation gunnery training for Armoured Fighting Vehicles by the armed forces in:

The controls produced by AFV Sim have the required accurate form, fit and function of the original equipment. This is essential to help develop and sustain both basic and advanced skill levels, such as target detection, acquisition, identification and engagement as well as crew procedures, coordination and drills.

AFV Sim has supplied simulated controls to defence companies in:

AFV Sim can design and manufacture simulated versions of control handles and control panels for other vehicles not listed and are also able to convert the original equipment to a USB interface to use for computer simulation training. 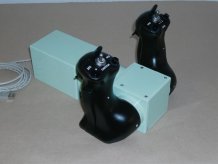