Before Seventh Storm Season In Tornado Alley, TIV2 Makes A Stop At The Cummins Booth

Cummins put a twist on CONEXPO with the Tornado Intercept Vehicle (TIV2), made famous by the television show “Storm Chasers” and the IMAX® film “Tornado Alley.” TIV2 made a stop at the Cummins booth for the show which was held in Las Vegas from March 4-8. TIV2, the brainchild of IMAX filmmaker and storm chaser Sean Casey, has withstood six seasons of traversing the Plains of the United States during the spring storm season, and has survived 11 direct tornado intercepts without an engine failure. Casey recently announced that National Geographic has given the green light to his next cinematic adventure with TIV2, “Extreme Weather 3D,” slated for release in 2015/2016 in digital 3D cinemas worldwide.

“The original TIV was built on a different chassis with a different engine under the hood. Every time we would have a breakdown and I would show up in a repair facility, I was always told I should have bought a Ram with a Cummins diesel engine,” said Sean Casey. “After hearing that enough times, when building TIV2, it was a no-brainer on which chassis and engine the vehicle would be built. When you are out chasing, you want the best possible components you can get; you need reliability. That’s why I depend on Cummins.”

Built For The Elements
Design and build work on TIV2 started in late 2007, with its debut in spring 2008. Design and aerodynamic engineering came from Casey, who had learned from experience with the original TIV. Sitting on a 2008 Dodge Ram 3500 chassis, the TIV2 comes in weighing around 16,000 lb, thanks to the layers of protective armor that shield the vehicle and its occupants from the over-150-mph storm winds that the TIV2 encounters while chasing storms. The vehicle is built on a 2-inch steel frame, and utilizes hydraulics to hunker down as a storm approaches.

Hydraulic skirts drop down to stabilize the vehicle, and four hydraulic spikes pierce the earth to anchor the vehicle, preventing the vehicle from flipping if winds should catch underneath. Windows in TIV2 are 1.6-inch polycarbonate, and the armor protecting the cab of the vehicle is a 2-inch combination of aluminum, Kevlar,® steel, rubber and polycarbonate. Even with the weight, TIV2 has a top speed of over 100 mph. Multiple data collection instruments are mounted on TIV2, measuring humidity, air pressure, wind speed and direction.

Rolling Science Lab
In addition to its media notoriety, TIV2 is widely known in the science community, as it serves as a rolling science lab. Weather instruments capture data and transmit it to weather experts focused on fully understanding tornadic storms, and furthering warning times ahead of storms in the effort to save lives.

“TIV2 is one of the most unique and instantly recognizable vehicles on the road today. This vehicle is a testament to the dependability and reliability that customers have come to expect from Cummins, and demonstrates just one of the many unique and innovative applications of Cummins power,” said Hugh Foden, Executive Director – Cummins Off-Highway Business. 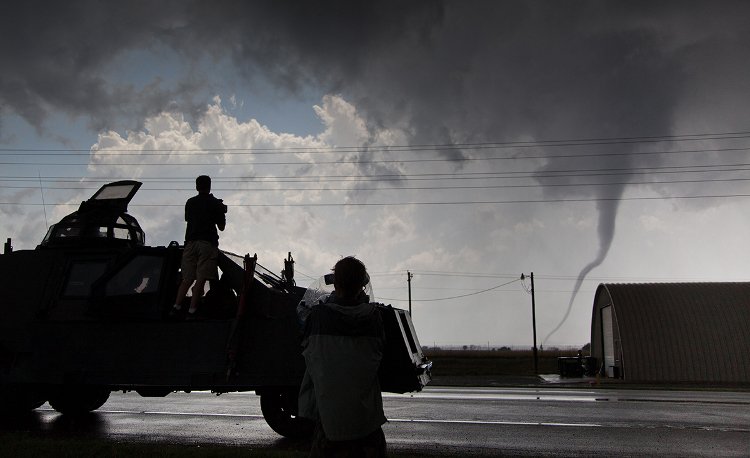