Defeating IEDs with a MOTS Design

In recent years, for well understood reasons, armoured and protected vehicle design has focused heavily on defeating the threat posed by IEDs and the other methods of attack which tend to characterise asymmetric warfare.

This design path has reached its apotheosis in such vehicles as Mastiff, MATV and Foxhound, all of which are driven by the need to counter the most prevalent operational threat.

As the focus moves away from counter-insurgency to contingency operations with the impending withdrawal of forces from Afghanistan, vehicle designers face a new challenge: how can they best design a vehicle which incorporates the lessons learnt so expensively in Iraq and Afghanistan, but which can still meet the demands of conventional operations.  Furthermore, how can they achieve this against a background of ever shrinking defence budgets?

One way in which a vehicle manufacturer can significantly reduce the up-front costs associated with vehicle development is to maximise the use of existing assemblies when designing a vehicle and, indeed, in many cases particular major assemblies are mandated either by the customer (for reasons of commonality) or by the manufacturer (to reduce development costs and speed the process).  Although there is no doubt that this reuse of assemblies can be beneficial, it can also constrain designers such that they have to compromise their assigned design objectives in order to accommodate the use of the assemblies in question.  In order to overcome any such issues, the most beneficial approach is for the development team to embrace the features of the mandated assemblies and, through innovative designs, incorporate these into the prototype.

The design of the SUPERAV, Iveco’s class leading amphibious 8 x 8 demonstrates this approach in practice.  In this case, the design team was presented with a series of design goals which had been driven by a comprehensive requirements capture process, identifying both the best performance of comparable vehicles, which were to be matched or exceeded, and the performance requirements sought by the user.  In programme terms, one of the key requirements was a short and cost effective development programme in order to match anticipated customer timescales.  In order to achieve this, the design team was mandated to use the chassis, transmission and running gear of Iveco’s highly successful 8 x 8 Centauro family, and the Cursor 13, a COTS Iveco engine drawn from range of commercial heavy truck engines.  One of the great benefits of each of these assemblies was the fact that the reliability of each element had been proven over millions of kilometres of running.

Use of the Centauro chassis had, at first sight, both advantages and disadvantages.  On the plus side, the H transmission configuration allowed any resultant vehicle a lower centre of gravity than other 8 x 8s which used a single central drive shaft.  Similarly, the H transmission allows a degree of redundancy if wheel stations on the 3rd and 4th positions on either side are put out of action.  On the negative side, the very characteristics which made the H configuration such an effective choice for an 8 x 8 mounting a full pressure tank main armament – Centauro is the only 8 x 8 capable of firing both a 105 mm and 120mm through a 360 degree arc – militated against its ability to counter under vehicle blast.  This was because, whilst the original design aimed at maintaining a low silhouette by placing the drive shafts outside the crew compartment rather than, as with more conventional designs, underneath it, countering the effects of blast is best achieved by increasing the distance from the centre of the blast: the effect of blast is reduced by the cube of the distance from the explosion.

Rather than seeing this as a hindrance, Iveco’s engineers worked to make a virtue of necessity.  As a first principle, they focused their design work on the crew, as their position in the vehicle was key to the survivability which the vehicle could afford them.  Accordingly, each crew position was equipped with a seat mounted from the roof of the vehicle.  This contrast with the more common practice which is to mount mine blast seats from the hull sidewall, which, whilst easier technically, provides significantly less blast attenuation.

The next step was to configure the hull to mitigate the effects of blast.  Standard practise to achieve this is to construct a V shape hull, something which, at first sight, appears easier to do with a standard drive train than the H transmission.  In fact, with intelligent design work, this proved not to be the case.  By raising the hull slightly using a sub-frame,

and by providing clear blast escape channels to the side of the vehicle, blast effects are mitigated dramatically.

The crew also benefits from the absence of any transmission components under the centreline of the vehicle which can, in the event of a mine attack, act as secondary projectiles.

Having vented as much blast as possible to the side of the vehicle, the next step was to manage the remaining blast.  This is achieved by the installation of blast absorbing materials between the outer and inner floors, presenting blast from being transmitted through the floor.

This approach to countering the effects of blast accorded particularly well with the need to provide levels of amphibiosity sufficient to allow the vehicle to swim fully protected and with a full crew and necessary mission equipment.  Where a traditional amphibious design will tend to be quite large, to ensure it has adequate volume to float, and relatively lightly protected, to reduce weight, the SUPERAV design focuses protection only on the areas around the crew, with flotation being provided by the fitting of very lightly protected compartments around this protected citadel.

These also enable the carriage of mission equipment, with personal kit being carried inside the vehicle.  Careful configuration of the flotation tanks ensures that these fit within the same envelope as comparable vehicles but, because the protection is focused on the areas which matter, class leading protection can provided but with a 20% weight saving.  In consequence, SUPERAV can deploy on amphibious operations fully protected and crewed and fitted with a remote weapon station, swimming in conditions up to Sea State 3.

The achievement of Iveco’s engineers has therefore been to avoid many of the critical compromises inherent in developing a well protected amphibious vehicle.  The end product is a vehicle whose protection matches or exceeds even non-amphibious 8 x 8s, a result which owes everything to a well managed, closely focused and highly innovative engineering approach. 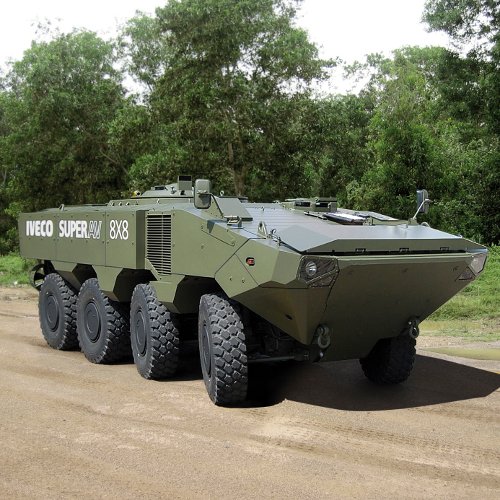