PELI Products is accompanying Dr.Marina Costa in her researches, working with a small Rigid Hull Inflatable Boat (RHIB) studying species of Commerson's and Peale's dolphins, that are present year-round in the coastal waters off the Falkland Islands.

“I am working at sea studying dolphins… we cannot go out without our PELI case. The RHIB is constantly under water from the sea or sky. Our cameras, phones, laptops stay protected in the case!” Dr. Marina Costa

When Marina and her team are at sea, they are the only humans in the middle of an astonishing wildlife - dolphins, whales, elephant and fur seal, sea lions, albatross, giant petrels, fulmars, sooty shear waters, and penguins... They work with 15,000£ of equipment including cameras with zoom-lenses, GPSs, drone, satellite phone, and several tools sampling animal tissues and water. It might not seem a lot but research does not have many funding and the lost of even one item would compromise their research.

“Once we were out at sea, collecting dolphin photo-identification data with our cameras, and a drone to collect diving time. The sea was calm flat but the drone was warning us of the presence of strong wind. We decided to call back the drone and… made it just in time! In 40 seconds we were run over by a strong wind and one minute later the waves arrived; we had just the time to put the equipment in our 1560 PELI case and fix it to the boat. To go back to the harbor we needed to cross Mengeary Point where the waves come straight from the Antarctic Convergence Current and… are massive! The wind was so strong that we had to give maximum power to move forward and the boat was ‘flying’ between one crest to another, full of water. When we finally arrived to shelter we checked the equipment.

We were not sure if it survived the big shocks and being underwater… To our joy everything was fine and working perfectly: no damage to the lenses, no damage to the drone gimbal clamp. Not one drop of water inside… we were the only ones a little battered!” 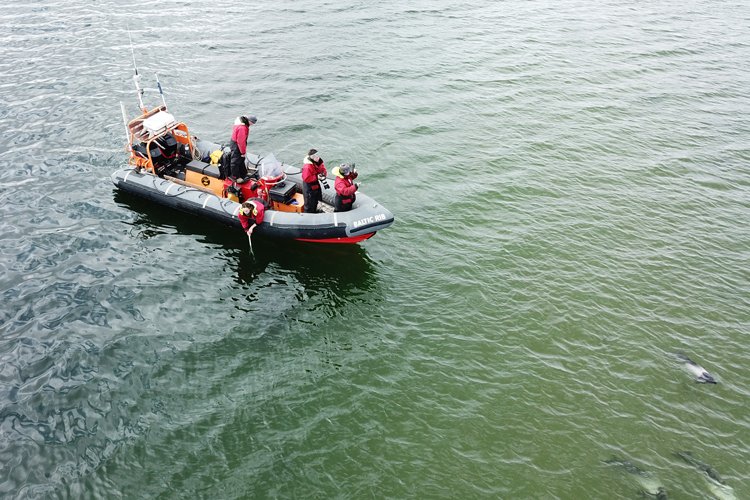