“We will respond to the threat of climate change.....”

In his second inaugural speech President Obama declared that his administration would work to address climate change;
“We will respond to the threat of climate change, knowing that the failure to do so would betray our children and future generations. Some may still deny the overwhelming judgment of science, but none can avoid the devastating impact of raging fires and crippling drought and more powerful storms.”

With  many communities in the US still recovering from the flooding effects of Hurricane Sandy in October, 2012 they will be delighted with  the President’s decision to make Global Warming a key theme of his second term. It is as yet unclear as to what changes will be made, however it has been suggested that “Energy and climate policy are going to be a top priority.”

One company equipped for the challenge, and proven in the US in a flood protection role is J&S Franklin with their Flood Protection System, DEFENCELL

DefenCell has been proven in action, and in thorough testing, to be an effective and easily installed Flood Protection barrier.

In April 2011, the town of Smithland, Kentucky, USA, which is situated at the confluence of the Ohio and Cumberland Rivers had to deal with a record surge in river levels.  The Louisville Office of the U.S. Army Corp of Engineers (USACE) requested an emergency installation of a DefenCell Flood Wall system.

Within 24 hours, 3 miles worth of DefenCell Flood Wall units were delivered.

Within an hour of delivery, small teams were able to start placing, connecting and filling the systems. After just two hours, installation was being achieved at a rate of 20+ units per hour, (Equivalent to 22,196 sand bags in the initial three hours after delivery.)

In 34 hours, more than 10,500 linear feet of DefenCell Flood Walls had been installed, over 700 units were filled with more than 4,700 tons of sand, by a willing and enthusiastic but untrained, local workforce. The barrier was more than one mile in length, adding an extra four foot of flood protection height to the Smithland levee.

DefenCell has been tested by the USACE ERDC center in Vicksburg MS, and has been proven to significantly outperform sandbags and other barriers though their ability to be installed (and removed) faster, offering less water seepage and to offer better overall endurance.

The DefenCell Flood Wall is a non-metallic geotextile based system, developed initially for ballistic defences in military operations.  However its versatility, flexibility and its ability to contour to uneven ground surface with minimal preparation combined with making angles and curves, being light weight and man portable, and the fact that it can be quickly constructed using local fill, sand and common aggregates, has shown it to be effective in a multitude of other applications, including: Flood protection, ground stabilisation, personnel and perimeter protection, critical infrastructure protection and firing ranges.

In a recent US National Climate Assessment draft report, Kevin Trenberth, National Centre for Atmospheric Research stated: “Certain types of weather events have become more frequent and/or intense, including...in some regions, floods and droughts.” “The incidence of floods has a component related to climate change and heavy rains, which are well established to be increasing in the U.S."

DefenCell is proven in a flood protection role both in the US and Internationally
DefenCell  can be seen at any time at DefenCell factories in Maldon Essex in the UK or in Nashville Tennessee in the USA. 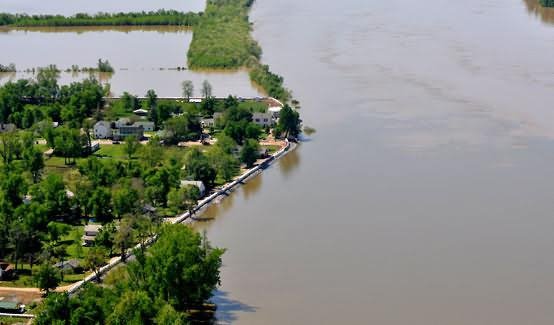