Platoon Leader experiences the Reliability and Power of Cummins

1LT Riley Emter was a Tank and Cavalry Scout Platoon Leader in Iraq and he is currently a Reconnaissance Platoon Leader in 3d Squadron, 3d Cavalry Regiment out of Fort Hood, Texas, USA. Whist Riley was deployed to the southern province of Najaf, Iraq in 2010–2011 and he used many vehicles equipped with Cummins Engines and his base was powered by Cummins Generators.

1LT Riley recently contacted Cummins to share his experience stating ‘The reliability of these engines and performance was amazing. They were enjoyed by the men of Maddog Company 3/3 ACR. My Commander, CPT David Griffith, and myself each bought a Dodge 2500 with a Cummins Engine upon redeployment back from Iraq. Thank you for providing such reliable engines and making high quality, long lasting products.’

Cummins Generators ran electricity for all 300 people on Riley’s base; they have to be consistently reliable to provide electricity and most importantly air conditioning for all 300 soldiers’ rooms in the heat of Iraq. Between the high temperatures and dust there are no better generators to deal with the elements of Iraq. In addition to the Cummins Generators a couple of Riley’s vehicles were powered by a Cummins Engine.

The M3A3 Bradley Fighting Vehicle and the RG-33 BAE Caiman Tactical Vehicle both have Cummins Engines in them. The reliability of these engines allows users to be able to accomplish missions and ensures the ability to return all the Soldiers back to base every day. Riley tells us, ‘There was never an occasion where a vehicle powered by a Cummins Engine had a problem. Several of the vehicles we used that didn’t have a Cummins had problems dealing with the heat of Iraq. It was great knowing we could rely on the Cummins product put in our tactical vehicles.’ 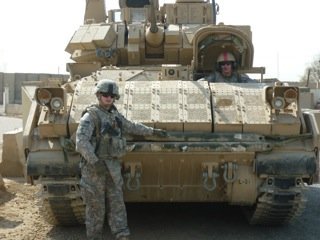