Sabrex Cuts Through the Competition

SABREX, the next generation of Flexible Linear Cutting Charge, produced by Chemring Energetics UK Ltd (CEUK), has cut through the competition to be selected by UK MoD to meet their capability requirement for a family of specialist battlefield engineering charges.

The SABREX family comprises five grades of weight per metre (40, 100, 350, 600 and 1150 grammes per metre) of fully Flexible Linear Cutting Charges. SABREX can be bent in all planes without loss of cutting performance, and has its own integral adhesive strip for affixing to the target. The range of grades has been specifically designed to meet the wide variety of applications demanded by Special Forces and combat engineers.

The capability of SABREX was recently demonstrated during a series of firings at CEUK Ardeer. The breaching capability of the product was fully demonstrated against a triple-brick thickness solid wall (SABREX 1150) and against ship’s steel plate (SABREX 350). Both tests were designed to simulate applications used by Special Forces to create access to buildings and ship compartments.  Other tests demonstrated the more conventional demolition capabilities of SABREX against various steel structures including ‘I’ Beams and large diameter pipes. Amongst the visitors to the firing were David Price, Chief Executive, Chemring Group and Mike Helme, Managing Director, Chemring Europe.

SABREX had previously been tested against a variety of steel targets on land and underwater. These trials confirmed the ability of SABREX to operate without loss of cutting performance down to 15 metres depth without any adaptations; a capability which is unique to SABREX.

The development of SABREX was the result of a close collaboration between CEUK, Chemring Nobel and Jet Physics Ltd., and is an excellent example of the overall complementary Energetics capabilities within the Chemring Group.

CEUK is now investing over £1M in new manufacturing facilities to enable SABREX to enter service with the UK Armed Forces during 2010. 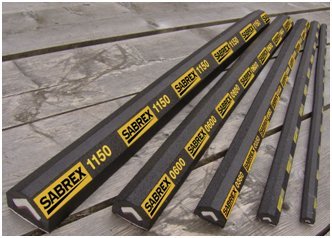