Jonny Mortimer Hendry completed ‘the toughest foot race on earth’ earlier this month in just 46 hours and 53 minutes, wearing a 10kg weighted vest, putting him in the top 40% of runners.

Jonny now at DEA Aviation served within the British Army Parachute Regiment for seven years including tours in Afghanistan. He said that despite being trained as a Para, the marathon was “by far the toughest challenge he had ever done physically and mentally and he did not think it was possible, especially during the last 20km.”

The reason for doing the race was to raise awareness of mental health issues as he battled post-traumatic stress disorder. Reiterating his campaign message, Jonny said: “When you go to war you wear body armour to protect you against bombs and bullets, but nothing protects your mind. Having set a world record for doing something I thought was previously unachievable I hope that I can help and encourage others to seek help to overcome their battles. With the war in Ukraine and other global conflicts, the pressure on mental health is huge. Any support we can give to bring the issue to the forefront of people’s minds is a benefit.”

So far Jonny has reached 50% of his £50k target for Support our Paras with the help of sponsors including NP Aerospace Edgar Brothers BeaverFit UK Firepot.

James Kempston, CEO, NP Aerospace, comments: “We are all amazed at the sheer determination Jonny has shown throughout the challenge. From our first meeting at the DSEI defence show last year to seeing him cross the finish line with a world record to his name is impressive. Soldiers’ and veterans mental health is an important cause and doing the marathon is an excellent way to bring attention to it.”

Natalie Urbaniak, Support Our Paras, comments: “Since leaving service, Jonny has continued to display The Parachute Regiment attitude of being ‘ready for anything’. We remain

proud to have supported him with his incredible physical achievements over the last few years and are very fortunate that he chooses to support us, and his Airborne family, in return. Raising the profile of mental health in our soldiers and veterans is something we take very seriously, and we are grateful to hve a great ambassador in Jonny to do this.”

SUPPORT OUR PARAS supports Paras in The Parachute Regiment and Airborne Forces through the welfare of veterans, serving soldiers and their families and widows, and through the maintenance of its regimental efficiency, ethos, spirit and heritage. 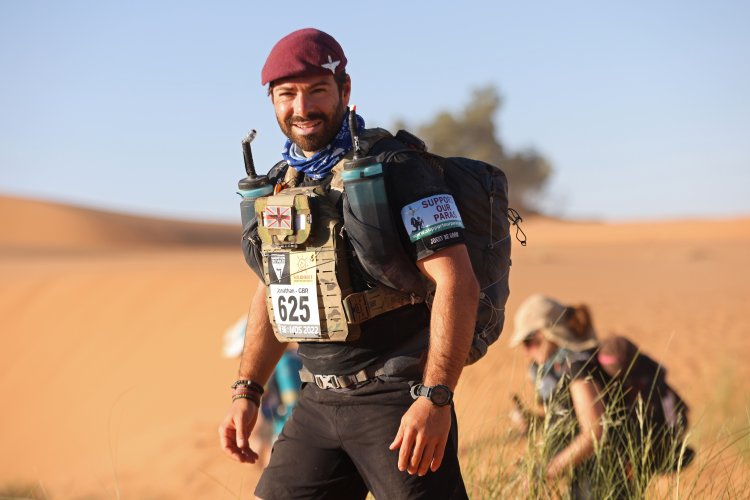