Chemviron Carbon is the European operations of Calgon Carbon Corporation – the worldwide leader in the production and development of activated carbon in both cloth and granular forms.  The Cloth Division, based near Durham, UK, is the world’s leading manufacturer of 100% activated carbon cloth, known under the brand name Flexzorb®.

Chemviron Carbon’s Cloth Division has been established for over 30 years.  First developed in the 1970’s, activated carbon cloth was originally used in military clothing and masks to protect wearers against nuclear, biological and chemical agents.

In the defence sector today,  Flexzorb® is used where protection to a wide range of chemical, biological or nuclear agents is required, for instance, in CBRN protective clothing, CBRN filters and decontamination wipes.

Flexzorb® activated carbon cloth can be used in the following defence applications:

Flexzorb® offers the most effective protection on the market today with low physiological burden at low carbon weights.  The benefit is a highly breathable garment with low weight.  Flexzorb® can be custom-made specifically for the CBRN protective clothing market so that it is:

Flexzorb® can be treated so that human sweat does not interfere with its performance and provides protection against liquid agent unlike other forms of carbon cloth.  The cloth can also be laminated to other materials to provide a composite which is fire resistant.

Flexzorb® activated carbon cloth uses the latest cutting edge filter technology for clothing compared to other materials such as embedded carbon, carbon fixed to support media or membrane technologies which, in comparison to Flexzorb®, can be uncomfortable and less effective.

Due to its microporous structure, Flexzorb® activated carbon cloth has an extremely large surface area.  To put its capabilities into perspective, just 1g of Flexzorb® activated carbon cloth has the surface area of over half the size of a football pitch.  This, combined with the strong electrostatic forces within the cloth, enables the cloth to be highly efficient at adsorbing both liquids and gases.

Flexzorb® is available in woven and knitted formats and can also be tailored to your requirements by various activity levels, weights and thicknesses.

Flexzorb® can also be used in CBRN protective filters offering protection at faster airflow rates and when used as CBRN decontamination wipes the cloth offers scratch free and liquid free cleaning ideal for glass and sensitive equipment.  The wipes also prevent spreading or off-gassing of harmful agents making them easier to dispose of.

Further examples of the use of Flexzorb® in the defence market include medical wound dressings for military use and missile decoy due to the thermal heat properties of the carbon cloth. 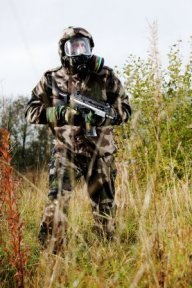