PAXCON [PX-3350], developed by LINE-X is an advanced spray applied polymer coating formulated to mitigate the effects of a bomb blast.

The Effects of Blast Mitigation

PAXCON is sprayed on the exterior and interior of the supporting walls and is touch dry in seconds. During a bomb blast PAXCON mitigates the effects of the explosion by providing a flexible liner that absorbs the force of the blast and holds the fragmented wall together.

PAXCON has been put through extreme testing by the Air Force Research Laboratory. Testing involved 9’x9’ panels, one uncoated and the other coated with PAXCON which were exposed to bomb blasts at a distance of 35ft. The PAXCON coated panel survived this test whilst the non coated panel disintegrated as a result of the blast.

Futher tests constructed by the Air Force research lab provided evidence that walls coated in the PAXCON material can reduce the stand off distance by over 50%.

The tests also indicated that PAXCON was the only coating that passed all bomb blast testing out of the 27 coatings that were tested.

After the 9/11 attacks in America LINE-X developed PAXCON to help protect current and future assets from attack.

The US Pentagon was one of the first major Government buildings to specify PAXCON “to protect the Pentagon against potential impacts and bomb blasts.”

PAXCON can also be specified  for new builds and applied during the construction of the site. Once the structural walls have been built, PAXCON applicators go on site to spray the polymer coating onto the prepared wall. With rapid touch drying time of only a few seconds PAXCON does not hold up the construction process of the site. Once the coating has been sprayed, the carpenters, builders and plasterers can carry on with their duties almost immediately.

LINE-X Protective Coatings Ltd also have a structural and masonry retro fit program where existing buildings/structures can have PAXCON applied to the substrate of the supporting walls, making them resistant to particular forms of bomb blast.

The retro fit program includes PAXCON being applied to lightweight structures such as plywood panelling and timber stud walls as well as heavyweight masonry structures made from brick or blockwork.

PAXCON polymer coatings will adhere to most well prepared substrates including wood, steel, fiberglass and dyneema.

PAXCON Blast Mitigation is an integral part of security planning. When security fails to prevent acts of terrorism PAXCON is there to save and protect targeted assets from terrorist attempts. PAXCON should be integrated into your anti-terrorism package to protect your assets when other preventative measures have not succeeded.

Blast Mitigation is one of many coating solutions provided by LINE-X Protective Coatings Ltd. LINE-X Spall Liner [PX-2100] is a spray applied coating that absorbs the impact from projectiles preventing both the projectile and the armoured plating from creating spall.

The flexibility and absorption that LINE-X Spall Liner offers when applied to armoured panels eradicates the splintering effect by cushioning the impact and entrapping the fractured elements.

The LINE-X spall liner has been engineered from specially formulated polymers to allow a certain degree of flexibility and durability to be able to absorb the impact from high speed projectiles when coated onto armored panels.

These advanced polymers have allowed the LINE-X to produce a spray-on Spall Liner for armoured vehicles to be used in conjunction with Dyneema and similar armoured panels which is significantly lighter and more cost effective than armouring with steel plates.
Other Spall Liner applications include the coating of Breastplates and Gun Turrets. LINE-X Spall Liner is currently being used on both the strike side and reverse side of Dyneema, Ceramic and Armour Plated panels.

LINE-X applications are being specified and carried out on several military and ‘blue light’ fleets due to the many advantages LINE-X coatings have to offer.

The ballistic properties are obviously one of the key attractions of the LINE-X Spall Liner material, which is able to provide advanced, lightweight  armoured protection at a lower cost to the usual methods of up-armouring vehicles. This coating also offers plenty of hidden gems including rust and corrosion prevention, resistant to most chemicals; it is easily maintained, and offers a non-skid surface.

Military vehicles operate in harsh and rough terrains, which have a tendency for rocks, stones and debris to be thrown up causing damage to the vehicle. The superior durability of the LINE-X range of coatings have lead to many military fleets adopting LINE-X as their choice of protective coating, in order to prevent exactly this type of damage from occurring.

UK “Blue Light” fleets have started to adopt the LINE-X coating as a Van Liner for the added protection of preventing projectiles such as scaffold poles being forced through the standard metal side panels of the van as well as providing a non-skid surface that is easily jet washed back for cleanliness. 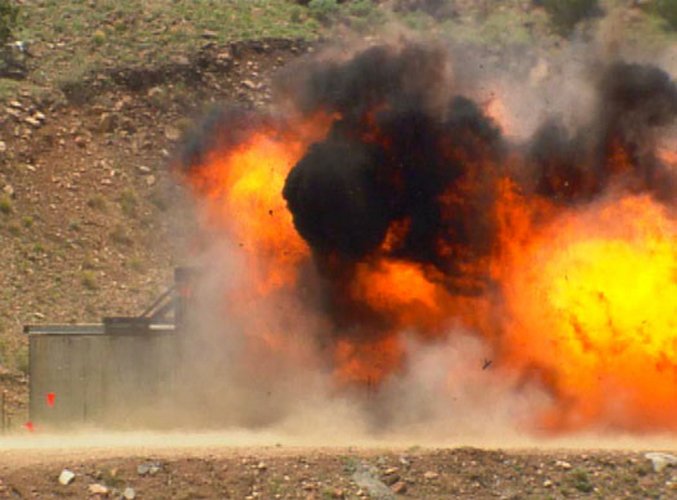