Smiths Detection, part of Smiths Group, is a global leader in threat detection and screening technologies for military, air transportation, homeland security and emergency response markets. Our experience and history across more than 40 years at the frontline, enables us to provide unrivalled levels of expertise to detect and identify constantly changing chemical, radiological, nuclear and explosive threats, as well as weapons, dangerous goods, contraband and narcotics.

Our goal is simple – to provide security, peace of mind and freedom of movement upon which the world depends. For more information visit www.smithsdetection.com

For military forces, the threat of chemical weapons has existed for decades and can radically affect operations, particularly on land and sea. That threat is increasingly spreading to the civilian population. The ability to detect an attack by chemical agents or toxic industrial chemicals (TICs), rapidly, is therefore vital to protect those in the front line and the public at large.

Smiths Detection is acknowledged as a global leader in chemical agent detection, offering individual products and fully integrated systems with highly sensitive detection capabilities that are reliable, accurate and easy to use.

When called to deal with a potentially toxic incident, emergency response teams they have to know what they are facing. Smiths Detection equips them with the most advanced technology, to face potential threats from unknown substances, with confidence.

Trace detection products from Smiths Detection are designed to detect the deadly threat from explosive substances, through the rapid analysis (in around 8 seconds) of samples taken on swabs.

Protection of troops against attack by biological warfare agents has long been a focus for Smiths Detection, which has developed advanced bio detection suites for biological agent detection and now acts as systems integrators on major programmes, to defeat bioterrorism.

As the threat target has widened to the general public, the technology has been adapted and simplified to create field deployable instruments that offer laboratory standard identification of bio agents, on-the-spot, with minimum delay.

X-ray scanner technology is a central field of expertise within Smiths Detection. X-ray inspection equipment plays an integral part in scanning for explosives, weapons, narcotics and contraband such as cigarettes and alcohol in baggage, mail and freight.

The company is truly global with Research and Development in six countries and systems deployed from Alaska to New Zealand. These factors make Smiths Detection the perfect industry partner for governments in advancing technology to defeat the terrorist threat.

Smiths Detection takes science out of the laboratory and puts it in the hands of security professionals. Its technologies are built into products that safeguard those in the front line and the public at large; protecting buildings and transport systems; screening everything from a ticket to a truck.

The products and systems are designed for the real world and are based on a deep understanding of the real operational environment faced by security and military professionals. An increasing activity for Smiths Detection is taking individual products and integrating them to form complete security solutions, including networking, customised to individual requirements.

Among the major users of Smiths Detection equipment are armed forces and public service workers who need protection against the growing threat of chemical and biological agents; security professionals who ensure our safety on board aircraft or in public places; police forces and customs officers combating a rising tide of illicit narcotics; and the emergency services who are confronted with unknown threats every time they attend an incident.

Some 120,000 chemical agent detectors have been supplied to international governments, principally for use in protecting military forces.

Smiths Detection has long been committed to eliminating threats at airports and on board aircraft, and provides security solutions for mass-transit systems and passenger terminals across the world. More than 60,000 x-ray systems have been sold worldwide and over 5,000 trace detectors for explosives are deployed in U.S. airports alone.

Smiths Detection is one of five operating divisions of Smiths Group, a global technology company listed on the London Stock Exchange. Smiths employs more than 22,000 people in over 50 countries. 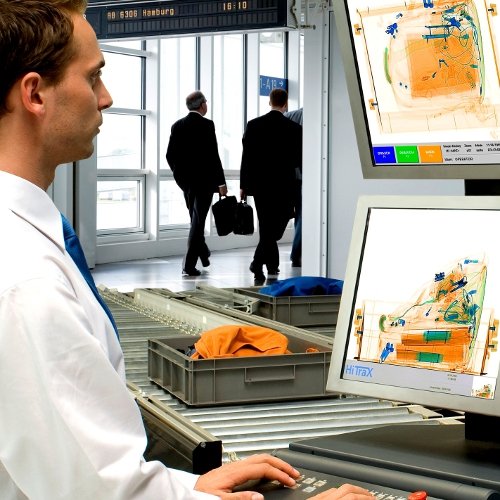