Electrothermal is a UK-based company that manufactures and designs water and ration heaters for military vehicles. Our heaters are designed for operations on the move and can fit into the cramped quarters of a tank, or other military vehicles, to provide necessary sustenance to the soldiers on-board.

The BV, still providing hot water to the troops

Electrothermal first designed the BV, in conjunction with the MOD back in the 1980’s, and it is estimated that there are over 20,000 deployed today. The BV (boiler vessel) is well known throughout the British Forces as it has been providing troops in vehicles, of all shapes and sizes, with continuous hot water for brewing up or cooking ration packs. It has been called the morale booster, amongst other things, and its rugged design has meant that it has been accompanying troops in theatres across the world for many decades in the Challenger, Foxhound, Scorpion, and the Jackal, to name but a few. In addition, all the British Army MAN trucks in the support vehicle fleet are equipped with our RAK15/30 units.

The units have proved especially beneficial in the recent war in Afghanistan. Drawing its power from the vehicle means there is no need to stop to take a much needed rehydration break, which could make vehicles and troops vulnerable to attack and slow the mission. Excellent insulation means that it keeps water hot for hours, the outside is cool to touch and it has a very low thermal image.

An army marches on its stomach

Electrothermal recognises the importance of maintaining both the fluid and nutritional intakes of military personnel at optimum levels. The human body’s mechanisms of energy production are complex, but it is an irrefutable fact that we require food and water to metabolise glycogen into useable energy and water is a primary driving force of energy production inside the cells, so that even the slightest loss of water makes us feel lethargic.

The range of RAK water and ration heaters is designed to meet the demands of modern, mechanised forces worldwide. The RAK water and ration heaters provide potable hot water and heat meals ready to eat (MREs) on demand to give a hot meal and drink for personnel whether under combat conditions, on patrol or back at base. They are rugged, manufactured to withstand the most harsh environments and can be installed in armoured vehicles, patrol boats and helicopters.

Our current range of RAK water and ration heaters includes:

The RAK15/30 is at the optimal size to fit into the cramped quarters of a tank, or other military vehicles, and can provide hot meals and drinks for its five person crew, heating two pints of water and five MREs simultaneously. When used for water only, the RAK15/30 can heat up to 1gal of potable water for drinks, washing or medical purposes. Depending on the power rating, the RAK unit can heat 1gal of water in just 20 minutes under normal ambient conditions.

The heater does work in extreme climates too but it may take longer to heat the contents if the prevailing temperature is bitterly cold. When switched off, with the cover closed and locked, the thermally insulated unit keeps its contents piping hot for between four and six hours.

RAK15/30 units are designed to withstand the rigours of modern conflict and have been comprehensively tested to meet military standard specification MIL-PRF-44466D, MIL-STD-461 and MIL-STD-810. They are also certified for food heating after meeting NSN ANSI 4-2013.

Constructed from a robust stainless-steel outer casing, the unit is sealed to be water-tight, so that any steam is retained within its interior. It has both low and high temperature settings and its own built-in control, so that a separate control unit is no longer necessary. The choice of heating ranges is either 66°C - 71°C (on LO setting), or 82°C - 88°C (on HI setting). 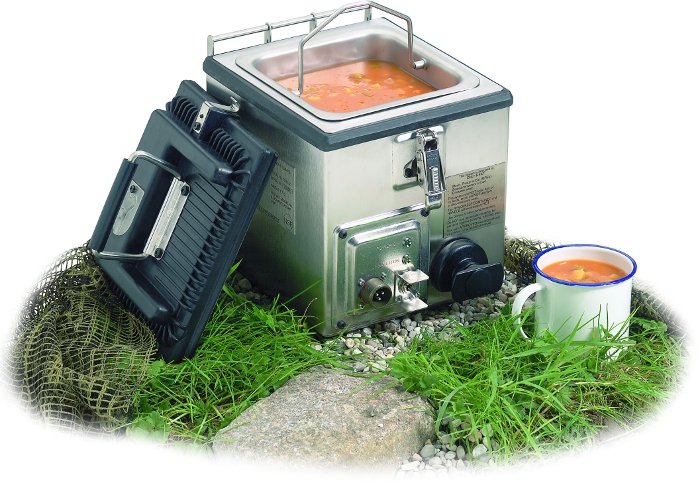