WFEL is an established leader in tactical military bridging, supplying 39 armed forces across the world for over four decades.

Our expertise is built on nearly a century of engineering excellence and innovation - includes concept design, prototype manufacture and full scale production of a range of rapidly-deployable, modern bridging systems for use in military and disaster relief scenarios.

We also provide a full package of value-added support services, including training, inspection, maintenance, repairs and spares, both in the field and at our UK-based engineering site in Heaton Chapel where we employ a team of 250 highly-skilled engineers and support staff.

Our in-house research and development capability enables WFEL to provide additional military-grade engineering solutions across the complete spectrum of the defence sector.

As well as being a prime contractor to both the UK Ministry of Defence and U.S Department of Defense, we operate a global sales network through our overseas representatives and work directly with international governments and Non-Governmental Organisations.

Just eight soldiers and a single launch vehicle can get traffic moving over a 46 metre gap in less than 90 minutes using an M-18 Dry Support Bridge (OSB).

The U.S Army has adopted the DSB as its new tactical bridging system and it has repeatedly proven its value in the field following deployment in the USA, Germany, South Korea and during Operation Iraqi Freedom.

The primary mission of the DSB is to support and maintain the momentum of attack when water and dry-gap obstacles are encountered that exceed the capabilities of assault bridging assets. Its secondary mission is emplacement on main supply
routes to the rear of an area of direct combat.

Covering gaps from 22 to 46 metres the DSB offers increased operational flexibility. Well in excess of 100 DSB systems will have been fielded over the next decade.

The Medium Girder Bridge (MGB) is a classic example of high quality precision military engineering that has stood the test of time.

In operation since 1971, over 500 MGB systems have been acquired by 38 armed forces worldwide, The MGB is constantly in use, and increasingly in demand, for both military and emergency or disaster relief operations, significantly enhanced since its initial design, today's MGB has multi-role capabilities, Component interchange ability - on any bridge of any age - continues to make this one of the most versatile bridging systems available.

MGB units are light, easily transported, can be constructed by hand and adapted for most tactical bridging requirements. The system includes piers, pontoons and ferries, all engineered for deployment with minimum manpower,

The Air Portable Ferry Bridge (APFB) was deployed on operations for the first time in 2006. It was originally designed to meet the British Army's requirements for a bridging system for Light Forces in roles which increasingly demanded mobility and flexibility.

In simple terms it is a 'golf bag' of equipment from which parts are selected for the role it is to play, be that bridging wet or dry gaps or use as a ferry with a maximum load classification of 35 (TIW).

The APFB is a modular system that can be transported rapidly and easily by land, sea and air using its own fold-away trailers, pallets or ISO containers. It can be assembled by troops or trained civilians making it an ideal selection for use in disaster relief or military operations conducted by Fly Forward Forces. Although new in concept the APFB is based on the highly successful Medium Girder Bridge with the two systems sharing many features. 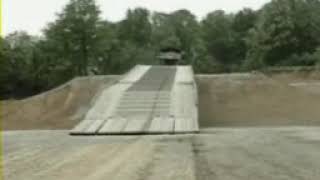 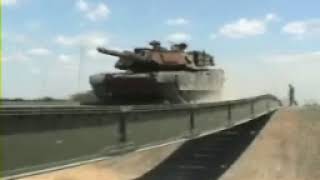 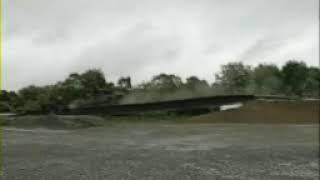