On-Board Vehicle Power Gains Attention In UAE, To Be Tested As Other Militaries Await Results

Dubai – The United Arab Emirates (UAE) Army, like other militaries worldwide, is seeking solutions to the challenge of ensuring that its troops have unobstructed access to electrical power while on the move or deployed in remote areas. The On-Board Vehicle Power (OBVP) could provide the answer to the problem.

The Leonardo DRS and Allison Transmission OBVP design uses a Transmission Integral Generator with power producing capabilities from 30 kW up to 125 kW integrated into an Allison 3000 and 4000 series transmission.

“The OBVP can be fitted on any utility, tactical or command vehicle and even emergency response vehicles like ambulances, where these vehicles would become a power supply source to the units they are deployed in, or to field hospitals, or command centers set up in remote areas,” said Carlos Aguirre, Director, Business Development, Land Electronics Business at Leonardo DRS.

The UAE Army has decided to subject the OBVP to intensive testing before deciding on procuring it. The UAE Army provided Leonardo DRS with one of its Navistar MaxxPro armored vehicles to have the OBVP installed on it, and then tested in the field for six months.

“The UAE military will try the OBVP-equipped vehicle in real live exercises to make sure it is up to their expectations and standards,” said Joe Rahbany, Vice President, Middle East, Corporate Business Development at Leonardo DRS.

The UAE has predominantly desert terrain with some rugged mountains, which makes the OBVP very ideal and handy to ensure supply of electrical power without the additional logistical challenges of towing a heavy tactical power generator hundreds of miles.

“These forces have to be able to operate independently free of an outside source for power, and rely solely on the OBVP, which would give them a good tactical advantage and more freedom to maneuver,” said Aguirre.

“Being able to have access to electrical power while on the move in isolated areas is quite a remarkable achievement, and will go a great way in enabling military units, big and small, to perform their missions more efficiently without having to worry about dragging along power generators,” said Najib Malaeb, a Beirut-based security analyst and commentator.

Rahbani pointed out that if the UAE military or another party decides to procure the OBVP, “it will not have to worry about retrofitting their vehicles. They just have to simply swap their built-in transmission with the OBVP, and they are in business.”

The OBVP is designed to fit on a wide range of vehicles regardless of their origin, which makes it suitable to armed forces with a diverse stock of vehicles as is the case in the UAE and many other countries.

“The OBVP is safe and very easy to operate by the vehicle’s driver,” said Aguirre. “It is also very suitable for disaster relief operations where rescue crews often operate in hard conditions without electricity. Having the OBVP on some of the ambulances or utility vehicles will provide the needed power, and even form a grid to power a small clinic or camp.”

Like the UAE, the U.S. military has also put the OBVP on trial within some of its units to test its durability and efficiency, added Aguirre.

Leonardo DRS has established a foothold for its operations in the UAE. The company opened in early 2019 a “new Systems Engineering Facility” at Tawazun Industrial Park in Abu Dhabi.

Having a base in the UAE enabled Leonardo DRS to provide support to the range of products it has supplied to the Armed Force in the country and in the region.

Several other Middle Eastern countries have shown interest in the OBVP and are awaiting the results of the tests by the UAE military. “Bahrain, Saudi Arabia and Egypt are some of the countries that have expressed interest and are waiting for the decision by the UAE to move,” said Rahbani.

“The OBVP will certainly make a lot of difference in field operations and prove to be beneficial to the militaries and civil defense rescue crews in the Middle East,” said Malaeb, a retired Brigadier General from the Internal Security Forces in Lebanon. 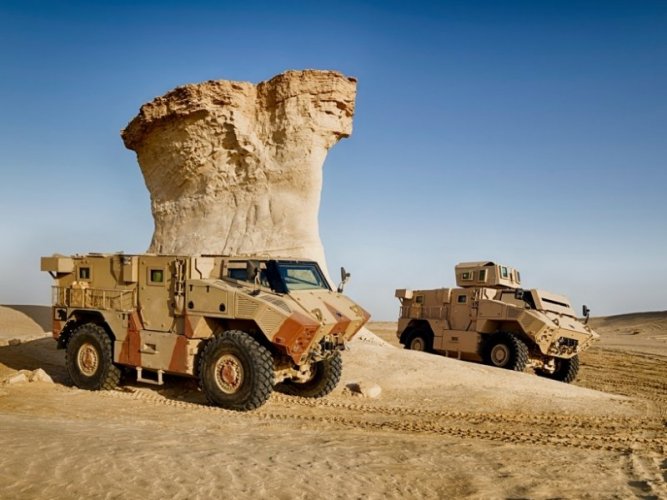