The Need for Integrated Communications in CBRNe Operating Environments

David Crouch is Global Subject Matter Expert for Military and Civil Defence for science-based technology company, 3M and is a professional chemist, with more than 25 years’ experience in the fields of materials science and CBRN protection. He is visiting professor at the Defence Academy of the United Kingdom (Cranfield University-Defence & Security) and is also the chairman of CBRN-UK (www.cbrn-uk.com), the UK industry’s specialist CBRN interest group.

Dealing with Improvised Explosive Devices (IEDs) that contain Chemical, Biological, Radiological or Nuclear (CBRN) agents is a growing threat to most developed nations.

For example, the Organisation for the Prohibition of Chemical Weapons (OPCW) found that chlorine had been "released from cylinders by improvised devices" in the town of Saraqeb in northern Syria in February of this year [1]. Although not strictly classified as a chemical weapon any longer under the chemical weapons convention, the use of chlorine IEDs in Syria has not been an isolated case and further instances have been documented in other countries such as Iraq [2] and Indonesia [3]. While improvised in nature, handling these deadly weapons is no simple matter. It entails detection, analysis and precise identification of these improvised threats, defusing and separating the explosive from the CBRN elements and, finally, safely disposing the components. According to the European Defence Agency [4], dealing with threats, where a CBRN material is delivered via an improved explosive device (CBRNe), requires a range of enablers, namely

1)    Detection, identification and monitoring capabilities to forewarn personnel of hazardous agent concentrations and provide additional information on the type and nature of the hazard, as well as continuously monitoring the hazard over time;

2)    Warning and reporting capabilities for the rapid collection, evaluation and dissemination of data about CBRN incidents, including prediction of hazard areas;

The extensive telecommunications networks and CBRN detection systems utilised by most western nations ensures that enablers 1 and 2 can be swiftly determined for any CBRNe event. Combined withurgency and a need for quick action should such an event take place, the importance of effective communication during such an event, including identification of challenges and possible pitfalls before crises occur, goes without saying.

Any CBRNe event would not only require cooperation between governments, counter-terrorism officials and counter-proliferation agencies through effective communication, it would also necessitate changes in the requirements for, and capabilities of, CBRNe Personal Protective Equipment (PPE) as the CBRNe threat changes. As while enabler 3 above, e.g. the PPE ensemble, is there to save life and prevent injury, it must also enable the first responder to carry on and do their job in a contaminated or hostile environment. If the chosen PPE ensemble cannot allow enablers 1 and 2 to be delivered in a timely and effective manner, then lives could potentially be put a risk - through a delay in dealing with an IED on a timer circuit, for example. Therefore, when considering PPE choices for a CBRNe event, we must always consider the holistic approach. Do the first responders’ bomb suits integrate effectively with their CBRN RPE or communications system requirements and vice versa? If the answer is ‘no’ then the essential time taken to respond effectively to changing situations increases.

First responders face unique risks in aiding those with unknown contagions. Their protective ensemble normally reflects a very high level of protection, including state-of-the-art CBRN respiratory protection. The modern 3M First Responder Respirator (FRR) from 3M, is able to cover a wide range of Concept of Operations (CONOPS) and threat scenarios, providing both positive and negative pressure capabilities within the single respirator face piece, and can be worn with advanced ballistic protection in the form of bomb suits designed to mitigate blast effects from any IED device (Figure 1).

However, the high levels of protection necessary to protect the first responder can, potentially, result in a combined PPE ensemble that actually inhibits the operators’ interactions and communications with the outside world. For example, full facepiece respirators can interfere with visual cues when speaking and listening. It thus becomes more difficult not only to recognise what is said, but also who is saying it. Distance and intelligibility are interrelated; longer distances between communicating individuals can result in less intelligibility. This latter facet is significant when one considers the size of operational safe distances utilised by government agencies around any CBRNe incident site, with cordons of up to 300-500 metres being typical.

Unless designed correctly, an operator’s PPE ensemble may inhibit communications, and this needs to be considered when dealing with the potential explosive part of the incident and before carrying out CBRN hazard management activities. Special communication equipment is now available from various manufacturers and some respirators now have speech diaphragms, or are made of materials that enhance speech transmission. For example, the speech diaphragm incorporated within the UK’s General Service Respirator – GSR (Figure 2a) is situated directly in front of the wearer’s mouth and is designed to minimise speech attenuation.  Through its unique design, the communication system on a modern respirator such as the GSR or FRR can be augmented via a Voice Projection Unit (Figure 2b), which simply clips onto the respirator’s internal speech diaphragm and amplifies the speaker’s voice, enabling it to be heard at distance more clearly. Whilst integration into a secure radio-communications network can be achieved through the addition of dynamic or electret microphone and “Push to Talk” or radio array, as depicted in Figure 3, with connection to a Peltor-based communications headset from 3M.

Dedicated communications systems such as the PELTOR COMTAC Tactical Communication Headsets from 3M have the added advantage of an environmental listening feature (level dependent functionality) for auditory situational awareness and face-to-face communications. As described previously clear communications over distance are extremely important during any CBRNe recovery operation, especially when the operators are using RPE.  Environmental Listening is a means of allowing low level sounds to bypass the individual hearing protection while still protecting against the harmful peak sound pressure levels likely to be encountered by first responders. Whilst sound amplification allows the user to hear low-level sounds, including range commands and conversation. Further demonstrating how important holistic PPE selection is when considering Counter-CBRNe operations.

As although the above respirators were originally intended to meet the exacting threats generated by the Cold War, the 21st Century first responder is now faced with an ever-shifting CBRNe threat spectrum. Modern respirators such as the FRR have evolved accordingly and are now capable of not only delivering their primary life-saving function, but also act as a platform with which to integrate other mission-critical infrastructure, such as communications systems and other PPE.

3M, Peltor and Comtac are trademarks of 3M Company.

At 3M, we apply science in collaborative ways to improve lives daily. With $32 billion in sales, our 91,000 employees connect with customers all around the world.  The UK and Ireland is home to one of the largest 3M subsidiaries outside the USA, employing 2,900 people across 18 locations, including nine manufacturing sites. Products manufactured in the UK include coated abrasives, personal safety equipment, adhesive tapes, industrial microbiology products and drug delivery systems. Learn more about 3M's creative solutions to the world's problems at www.3M.co.uk or follow @3M_UK on Twitter. 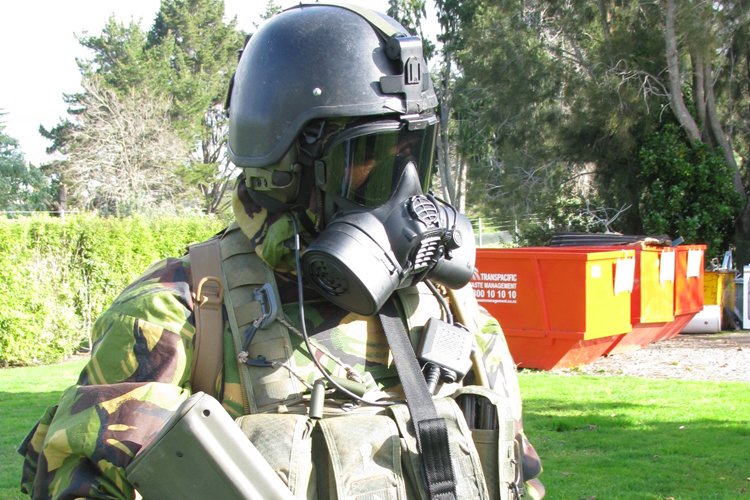 The Need for Integrated Communications in CBRNe Operating Environments